You can still breathe its medieval origin, when Bruges was one ……..

You can still breathe its medieval origin, when Bruges was one of the major cities of Europe. About fifty or brugges bridges, hence its name, are responsible for contectar the ends of the many canals that cross this little town, capital of West Flanders region in northwest Belgium.

This small Belgian city is a unique place, away from the noisy metropolis, it is an ideal place to stroll while its rich architecture is quietly admire or navigate by boat through the canals that traverse the second Venice of the old continent.

For this reason he has not surprising the large number of tourists from around the world who walk, or even crowd the streets, monuments and museums. To visit this beautiful city full summer months should be avoided.

The main attraction of Bruges is its historic center, declared World Heritage Site by Unesco in 2000.

A practical way to travel to Bruges, is to fly to Brussels, and then move comfortably by train there. Similarly, if you have more time, you can move to other cities, such as Ghent, Antwerp, Leuven and Mechelen. We took the opportunity to visit Brussels before flying back to Barcelona.

If you want to give more charm to your visit, I recommend you go to Damme, a small picturesque village near Bruges, which can be accessed in a charming half-hour trip by boat, crossing the channel that connects the two localities.

Getting lost in its narrow streets and bridges, browse your channels, visit its museums, its quaint shops and monuments, evening walks alongside its canals, it is advice to enjoy the main attractions of this city.

Ah! and do not forget your camera!

In such a romantic city as Bruges can not miss a walk in the Lake of Love (Minnewater) and cross the bridge that ensures eternal love. 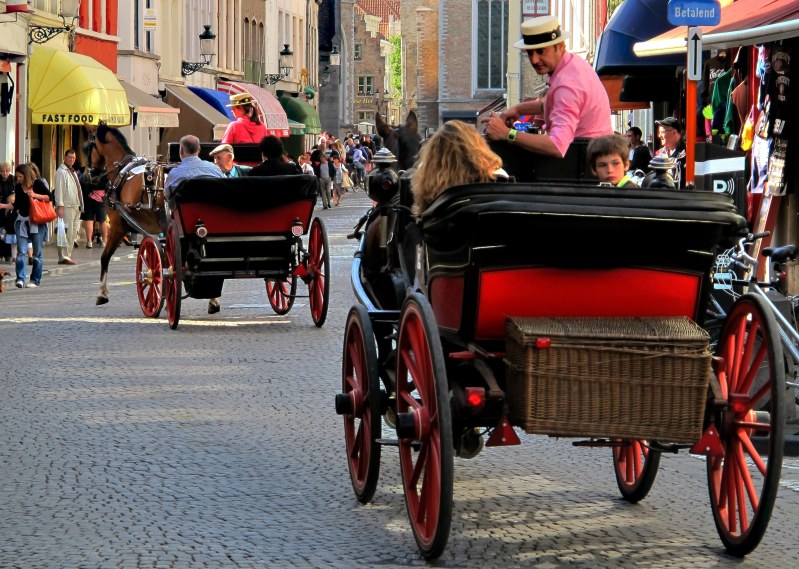 Besides being able to go walking, cycling or surfing channels, you can take a ride in a carriage.

Bruges is a beautiful city, but probably more beautiful as seen from their channels 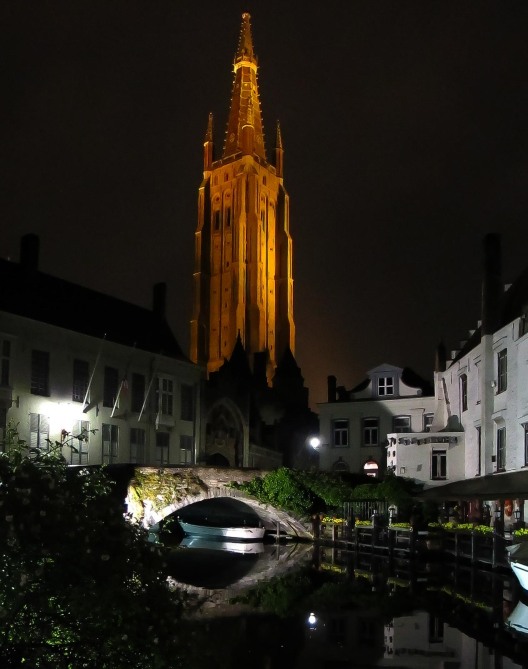 With a height of 122.3 meters, the church of Our Lady is the second tallest brick building in the world 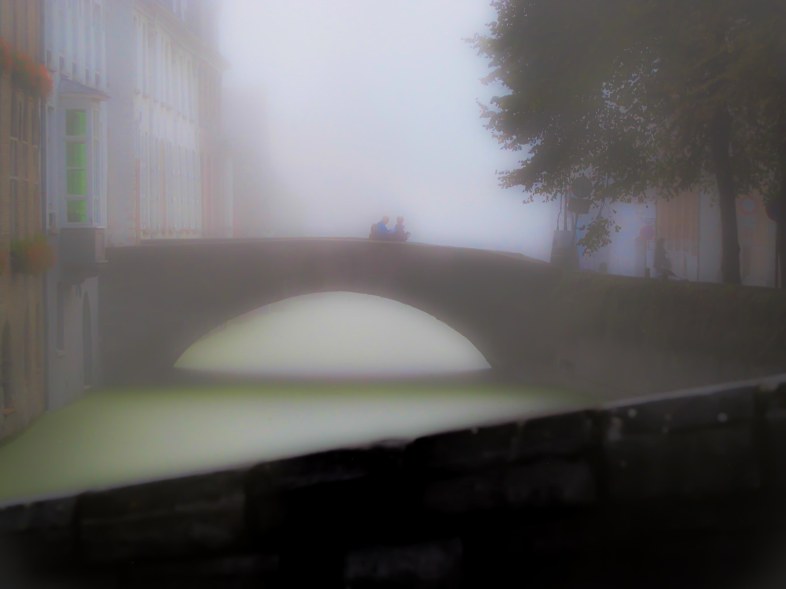 The fog always adds a special touch to your landscape 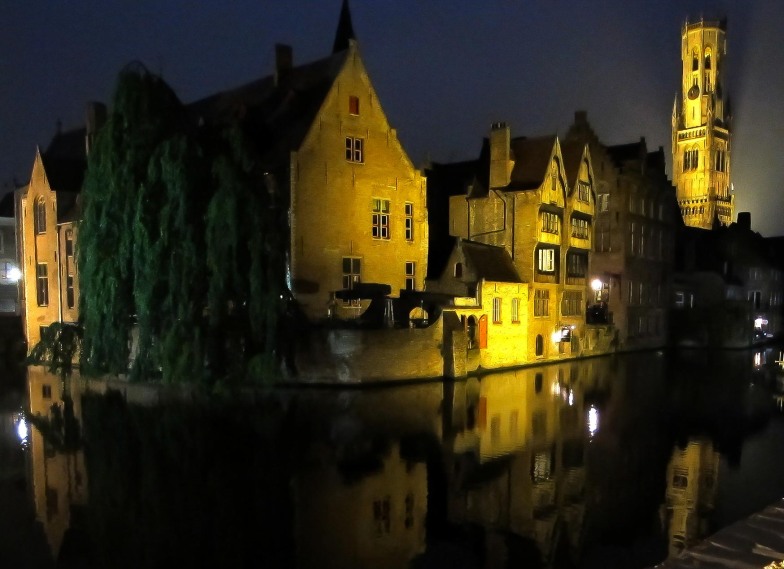 This is the most famous image of the city

It is sometimes called the “Venice of the North”, but also there are other cities with channels such as Amsterdam, St. Petersburg, Stockholm, Copenhagen and Hamburg, which is also name them this way.

One of the piers for visiting the city by boat

Prospects can be seen from the water are even more spectacular 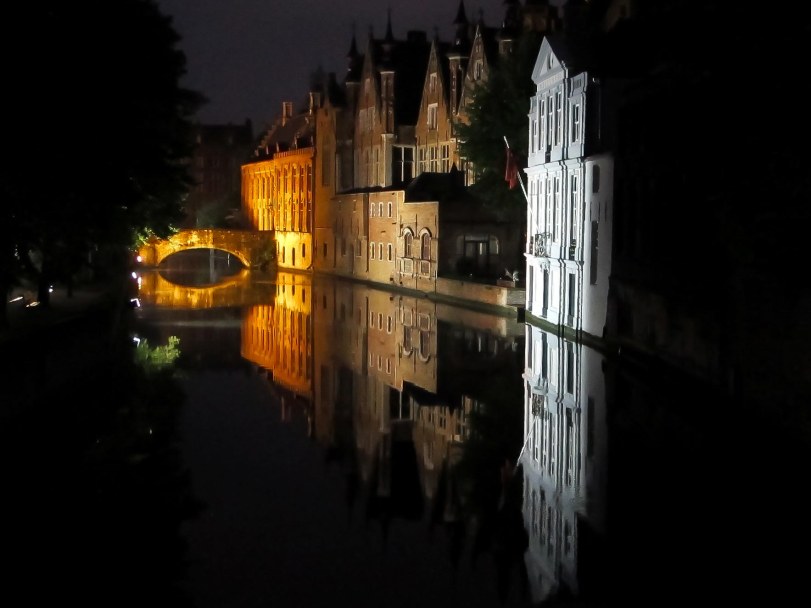 Those who have visited say it: a stroll through Bruges is a journey to the past, a fairy tale come true. 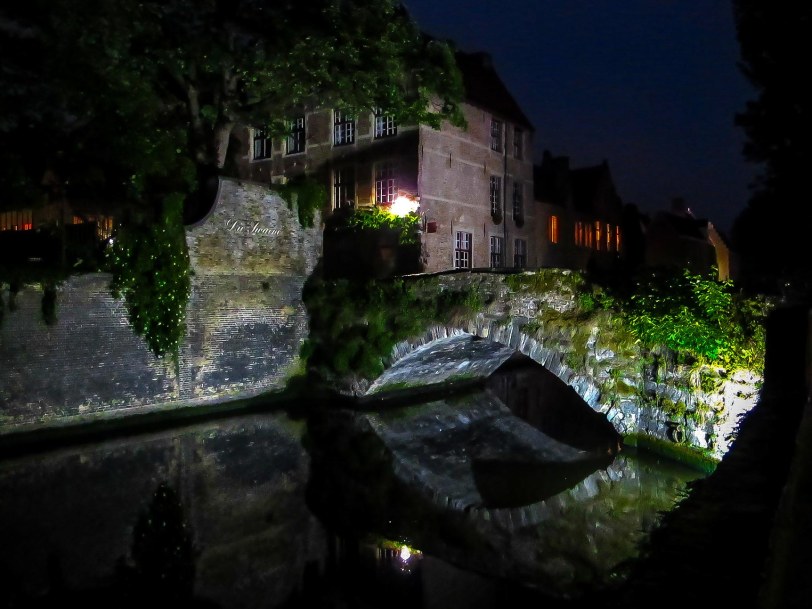 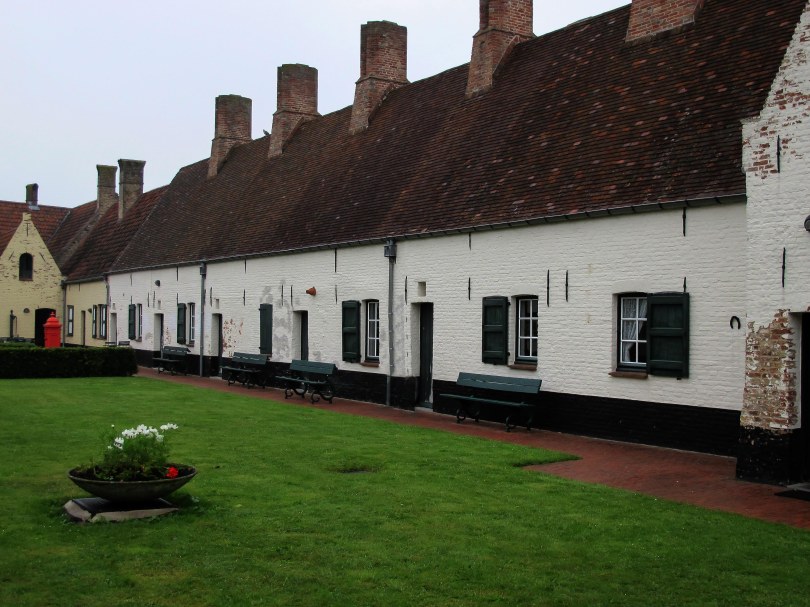 Housed in a poorhouse seventeenth century, the Museum voor Volkskunde, offers through its large collection of objects, a vision of what life was like in the city in the late nineteenth century. 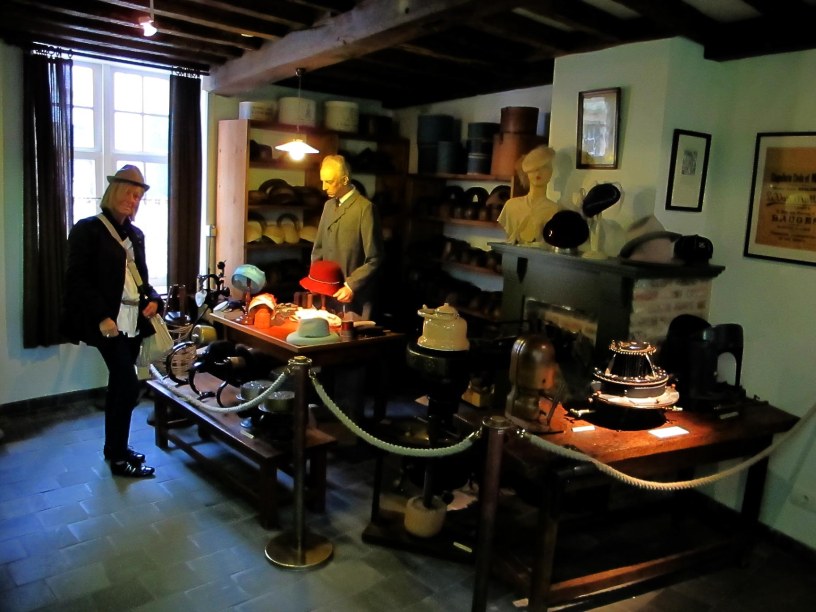 A shoe store, a bakery, a pharmacy, a hat shop, a classroom or a bedroom, are some of the rooms that make up the museum. 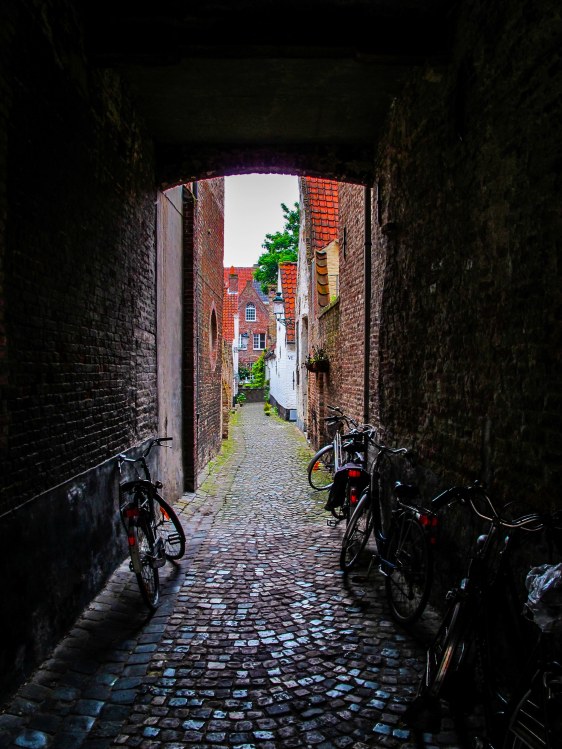 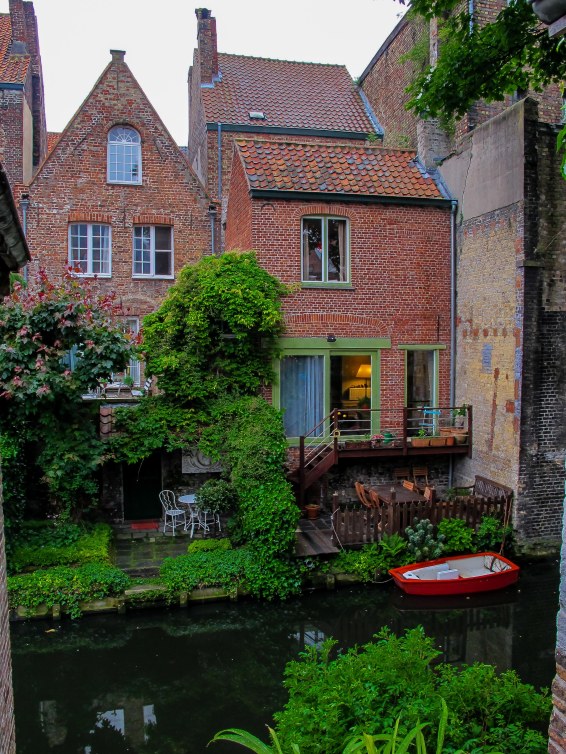 Typical house with its dock 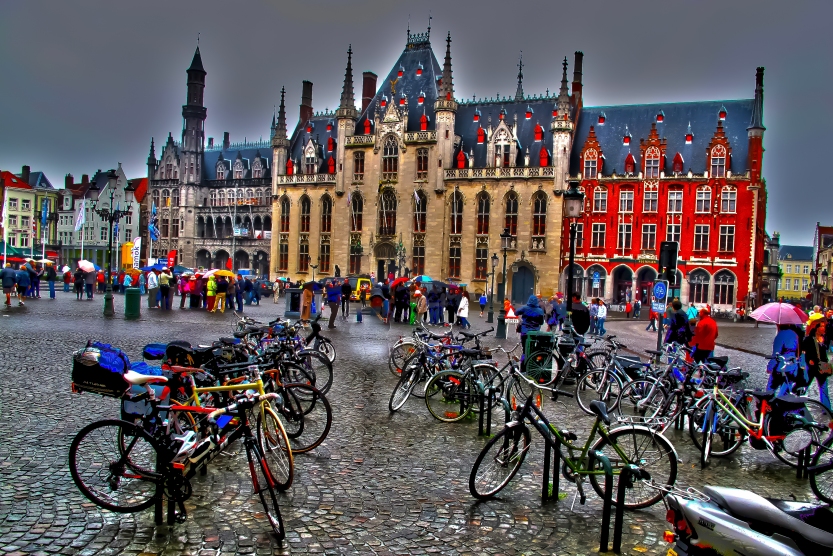 The Burg square is surrounded by various historic buildings such as the Town Hall and the Basilica of the Holy Blood and today is a major tourist attraction in Bruges.

On the left, the Basilic of the Holy Blood is not lost in the beauty of Burg Square, and is calling attention to the darkness of the facade and the amount of detail that can be admired in it

Located on Market, is the symbol of this Flemish city, it is the best preserved city of Flanders. This tower, which has a height of 83 meters, is the power and the desire for freedom of the people of the Middle Ages. Every hour, the bell tower glad the city with the sound of the bell! If you wish, you can climb to the top of the bell tower, which includes 366 steps 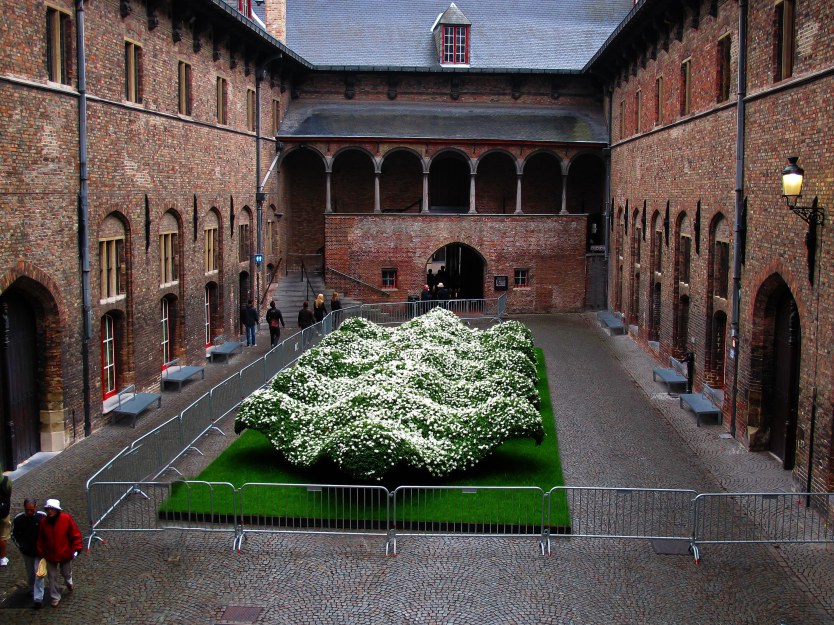 Central courtyard of the building housing the Belfort

St. Salvador Cathedral, the main church of the city, is one of the few buildings that survived Bruges while undamaged 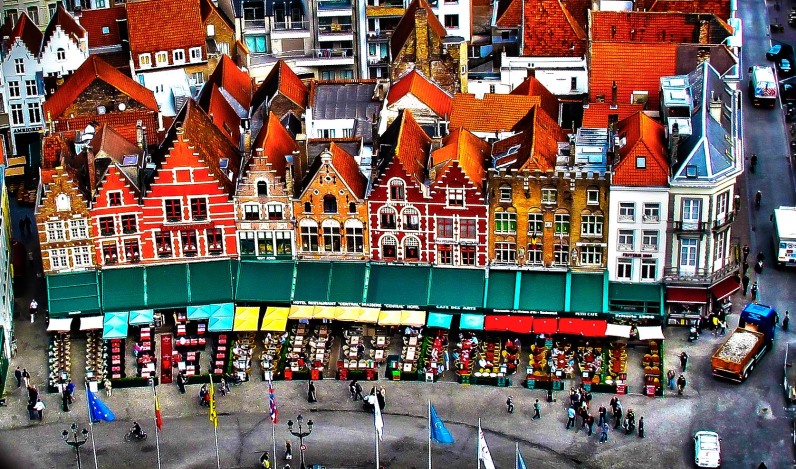 From the bell tower you can get a lovely view

The Blinde Ezelstraat is under the arch that connects the beautiful building of the Oude Griffie, one of the most beautiful Bruges, and the City, south of Burg Square 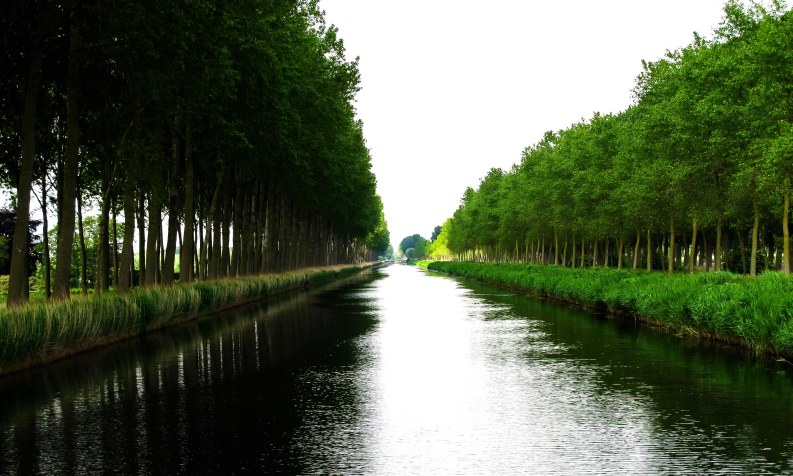 The idyllic landscape Damme Canal, which has one of the most majestic rows of trees Belgium, offers arguably the most scenic panorama of the countryside around Bruges 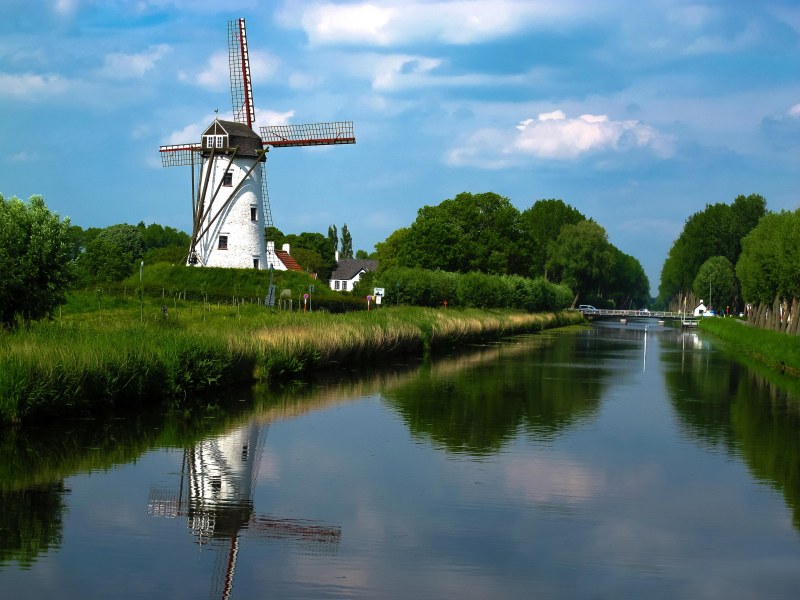 The 200th anniversary of the canal, also known as the Napoleon Canal, promoter of its construction, is celebrated in style this year. 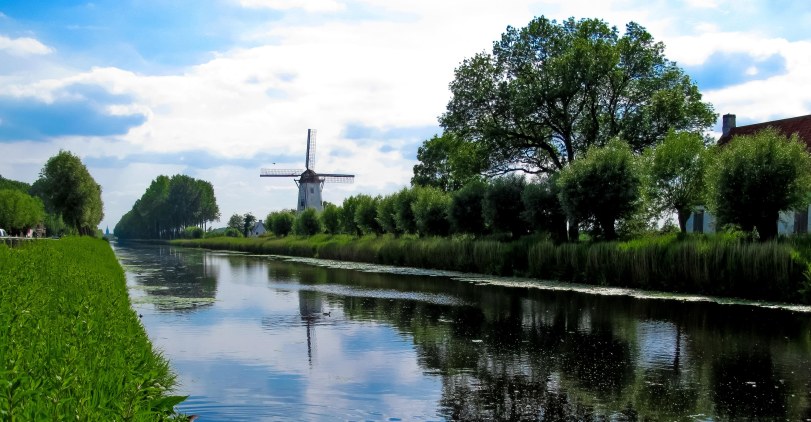 Image taken from Damme. At the bottom Bruges.